The smell was terrible.  It haunts us to this day.  It lasted a full three days, probably until the body decomposed and evaporated in the blazing heat.  Mom too wrinkled her nose and shook her head.  When she saw our nostrils quivering, she said (she is certain we understand every word she speaks to us, and she is absolutely right), “Some poor pigeon that plopped somewhere near our balcony due to the heat.  Happens every summer.”

Now, we love chasing those silly birds off our balcony railings, but this was a different matter altogether. Dead birds and dead bees make us very uncomfortable.

It is another matter when creatures die because dying is a part of life, if you know what we mean.  Not too long ago, we were rattled by a horrendous screech in the night of what had to be a bird.  We had seen a large bird circling above. Actually, on two occasions a huge bird had skimmed over our balcony while we were going about our business, startling Mom out of her wits.  Mom swears the bird almost tousled her hair though Dad says her hair anyway looks like a bird’s nest so it wouldn’t have been noticeable.  We still don’t understand why she flung a cushion at him – we thought it was a delightful compliment.  Anyway, getting back to point.  The screech that lasted forever and had us quaking was the dying cry of a smaller bird that must have been attacked by that large bird.  We still think it might have been us had Big Sis not rushed us indoors because we were then barely the size of Dad’s palms (Okay, maybe slightly larger).   Once or twice that large bird has perched on our railings but it is so shy that the slightest movement

indoors, even that of someone on the sofa uncrossing their legs to sit upright, has it take off.  Still, we have always been wary.  Something alerts us to the silent swish of large wings and we run for cover.

We know in our kingdom death is for survival.  We do not raise the heat levels to have our own fall dead out of the sky. Nor do we use poison or killer waves and what have you that destroy our world.  We do want to remind you that we know all this since we are scholarly, knowledgeable creatures who keep our eyes and ears open when our humans go about their lives.  We are amazed at the amount of talk talk on the idiot box and everywhere, and equally amazed that still the world is turning into something as ridiculous as this – 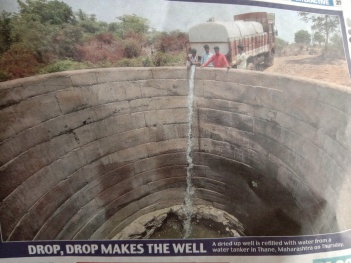 🤣🤣Where else in the universe will you find things so topsy-turvy that a tanker fills a well with water?  Where despite baking in the heat and having birds and bees fall dead from the sky and sweet little sparrows and ugly vultures disappearing and warnings humans give themselves of these things leading to extinction of human life, nothing changes?  Things around us are so weird that our Word of the Day has to be Theatre of the Absurd to describe them. Anyway, we are souls of discretion and are usually 🤐about human weirdness because we love humans just the way they are – stupid, short-sighted, and suicidal.

So, we see the patches of brightness instead of doom and remain happy and hopeful.  If humans have created an oven, there are also those who tend to its victims and try to make it comfortable for them.  Not all vultures have disappeared.  The cry of a peacock can be heard outside our complex gate, and no one has hunted the bird down for at least the last five years.

There still exist people like our Folks who would rather dance around a lizard or gently towel a bee stuck indoors back outdoors to return to its own rather than squish it.  Absurdity – we hope – will slowly evaporate like the stink of the poor dead pigeon…

But if it doesn’t, at least we have each other. 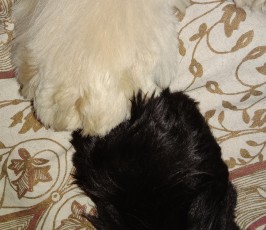