Being indoors in the rain has succeeded in one thing: enhancing our study.  For want of anything better to do, and after getting bored of getting bored (Man, we’re so bored!), we have dug deeper into books and laptops, peering more and more over shoulders.  And so our WOD (Word of the Day) – simile.  We love the word as much as we did brouhaha (Bow How Ha elections) because it is such a smiley word…whichever way you say it or spell it – we still do not get the concept of s-p-e-l-l-i-n-g – it is such a happy 😊 word!  But humans kill it by making it boring, using it to refer to daisies, and cucumbers, and lily, and toast, and so on and so forth.  Who wants to be as fresh as a daisy?  Or as warm as toast?  Intelligent and scholarly that we are, we have to jazz up the l-e-x-i-c-o-n.  See if you are as intelligent as SnuZa (simile #1) and check your score in the quiz that follows.   But let’s get one thing straight.  Notwithstanding any quiz, the fact remains that you will never find anybody or anything that is as adorable as SnuZa, so don’t even try.  Having made that clear at the outset, we move ahead.

[* Notice we are skirting the cliches – as inseparable as the yin and the yang – though nothing describes us better. 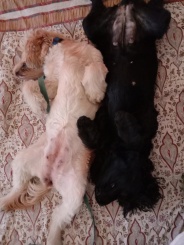 Now you provide the similes to our generously worded clues: 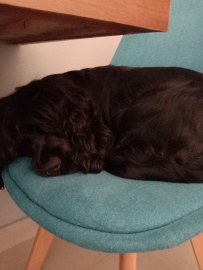 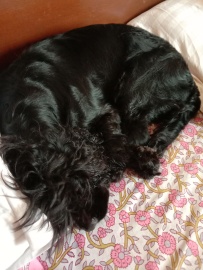 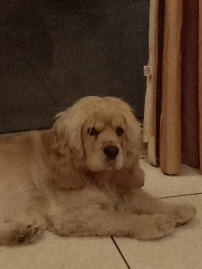 Now total your score, one point for every correct answer and check against this:

17-19 – Enviable.  You are getting there – as nuanced as SnuZa in recognising subtleties

– the difference between the sound of Mom’s house slippers and her outdoor shoes, between Mom slinging her bag to go out and picking it up to dust under it, when it is safer to make yourself invisible, and so on.

14-16 – Not quite there. As forlornly resigned to the situation as Snuggles settling down in a corner on seeing Folks getting set to go out without her.  Yet, as thick as Zaza who will just not get the point and scamper after the Folks all the way to the door.

11-13 – Go back to the drawing board and sharpen your senses.  Become as vigilant as SnuZa who protest and chase any belonging of the Folks being taken out of the house by an outsider, whether it is a bag of old clothes, a flower pot, or garbage.

Below 13 – Give up.  As hopeless as SnuZa’s maths. If you didn’t get what we mean here, start over and do some calculations of your own.