It was just another morning when a pigeon decided to flutter into Mom and Dad’s bedroom. Mom says natural instinct kicked in. We have a vague memory of pricking ears and twitching noses before some force took us chasing it, trying to grasp it to take back to Mom. Eventually, with Mom’s intercession, the stupid bird found one of the three open windows and door opened hastily to let it escape and cheated us of our first hunt. Mom suddenly turned all wistful. It was then that we heard one of Lord Bisquit’s legends.

Many moons ago, when Lord Bisquit was a sprightly young pup, Mom came home from work to a subdued welcome. She could not figure out what the matter was until she flopped down on the sofa in that same room we had tried to hunt in. There, carefully placed under a blood stained handkerchief she found a dead pigeon, neatly killed with a nip to its neck. The handkerchief had once been Dad’s folded one left on the sofa but was now a shroud. Till today, no one knows what exactly happened but everyone guesses that bird too found its way in and came across Lord Bisquit sunning himself. Having given in to his instincts, Bisquit became unsure how Mom would react since he used to see her feeding those creatures every morning, so we guess the attempt to cover up his deed. Well, that bird got a decent burial but we resent his success. He was alone. He did not have to contend with a screaming Mom hopping around, helping the silly bird find escape routes with gentle nudges of a feather duster.

One tale led to another and we were fed doses of how Bisquit had saved the house from a rat invasion when one huge rat somehow entered the apartment and scurried around terrorising its three occupants, one adult screeching woman and two excited but nervous kids, into jumping on tables and trying to open doors to get it out. It was Bisquit who rushed to the defence of his family. The rat died a quick, painless, death with one nonchalant nip to the neck. Stories of his run-ins with peacocks, monkeys, snakes at Nani’s House are legion.

Sorry, we are getting a little ahead of ourselves here. We forget humans are not as intelligent as we are and will get a little lost in our narrative. Let’s rewind. We had mentioned our discovery of Big Bro II (Come September @ Nani’s House). It was a bit of a shock because we have lived so far comfortably secure in the fact that we are the be all and end all of Mom’s life. To come across someone whom she loves as much ( we suspect more) is a bit of a trauma.

Big Bro II and Mom have a history. He is Bisquit – with a ‘q’. He is oh so stuck up! Now, we are no snobs – lovable, friendly creatures that we are – but we need to point out here at least we have papers of record. Bisquit has none, ‘q’ or not. His mother was abandoned in a park. She sought shelter in a house whose occupants found her on their

steps, adopted her without a second thought, and called her Bambi. The occupants happened to be Mom’s aunt and cousins, so when Bambi had pups, Mom, Big Bro (our favourite one) and Big Sis brought little Bisquit home. Except for his long thin legs, he turned out to be quite handsome, though we’d never admit it to his face, close enough in looks to a Spitz. His eyes are hypnotic, so we are careful never to look him in the eye but go for his ankles.

All this was in pre-historic times – before the Folks relocated to where they are now and before Mom had to take up a job that had her out of the house for half the day with a load of work carried home to occupy her for the rest of the day. Big Bro and Big Sis were busy with school, classes and what have you. After the shift, it was heartbreaking for them to leave Bisquit all alone in the house for hours on end. Mom still fondly and gratefully talks about one of her line managers who was horrified that she would have to leave the dog alone for extra hours due to an assignment and ordered her to slip out for half an hour to check on him, feed and walk him. But this could not be an everyday blessing. Sensitive that we are to our Folks’ moods, we pick up the tremor as they talk about the decision to let him stay on in Nani’s House after seeing how much he enjoyed a summer there. Big Sis was too little, but it is a scar Mom and Big Bro still carry, for after all Lord Bisquit was Big Bro’s first dog. Mom confides to us that she had a hole in her heart for all these years as she went about her life. She hugs us extra tightly when she describes how we filled that hole, but we are clever enough to sense we filled only a part of it – a major part, but only a part. Big Bro does not say much, but when we see him and Bisquit together, we know, just know.

Of course, Mom knew that that Nana and Nani would adore him. And, boy oh boy, did he flourish! He is lord of the manor there. No family picture is complete without him, a strictly-particular-about-tidiness-of-things Nana keeps extra jars of tit-bits on his bedside table only for him, a never-ever-dogs-on-my-sofa Nani has a sofa in her room torn to shreds by his nails as he makes himself comfortable, and so on. 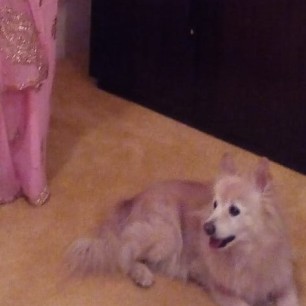 Legend goes in Nani’s House that many a newcomer he has growled or snarled at has proved to be an unscrupulous person in some way, a potential threat to the household. He is super-protective of Nani, and is known as her pilot car because he knows her routine so well that he precedes her as she goes about her day. People swear they can set their clocks by his knowledge of her routine.

Since Nani has a lot of travelling to do in the next three months, she sent Bisquit back with us when we returned after a holiday. It was unthinkable leaving him alone to caregivers for such lengths of time. Life has come a full circle for him. He is back to his childhood home though he misses Nani. Mom is thrilled. She is making up for lost time. In all fairness, after Big Bro’s return at the end of his holiday (😥 we miss him), Big Sis and she have not changed towards us, yet we cannot help looking balefully at the third bowl in the row, the extra bowl of water, the third portion of chicken … To look at the brighter side of things: since Bisquit’s appetite is unpredictable, we often get his leftovers. Most importantly, Mom was determined never to keep dogs if she was still working, so she waited 11 long years to get the doggie sunshine in her life again. We would never have found this forever family if she had not wanted to fill that hole in her heart and opted for a semi-retired life to be there for us. Thank you, Bisquit, in a twisted way (it’s safe – he can’t see well enough to read this.)

There is a Bisquit-SnuZa cold war in the house, once each side knows the other is basically alright. We may rush to the rescue if he struggles against Mom with the eye drops, but it gives us great pleasure to push past him with greater force than necessary as all three of us charge (well, he limps actually) for the door at the bell. Mom tells us we are playing ‘fetch’ in the same terrace he learnt to play football with Big Bro, but he does not play any more however often we drop a ball at his feet. The only time he jumps is when we snap at him from the safety of under the bed when Mom isn’t looking. We are all the time cautioned to be as gentle with him as our Folks are. It seems he has war wounds – a dislocated hip joint thanks to his attempt to protect his territory from a peacock. We know he has been to hospital for a surgery, that Mom and Big Bro took him again this time for a check up, and that the doctor gave him supplements. We know the Folks want him to be as comfortable as they can make him. We know that he cannot see or hear so well, and that he walks awkwardly because of weak hindquarters. We know he loses his bearings (he walked out the main door, down a floor, instead of out into the balcony, driving Mom to tears – and us to whining – till she ran down the stairs in utter desperation.) But the only excuse, we are told, for his liking peace and quiet and sleeping a lot after a lifetime of activity is that he is fifteen. That is no excuse. We are also fifteen. Why should it matter if it is fifteen years or fifteen months? Fifteen is fifteen. 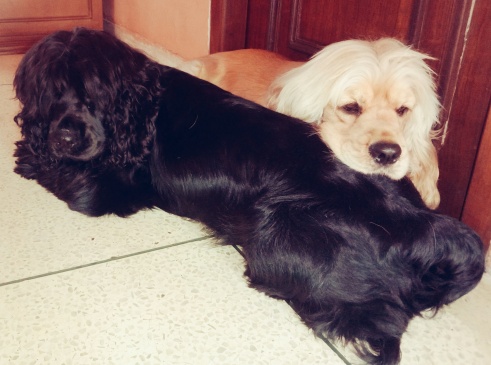 2 thoughts on “The legend of Lord Bisquit”